Sometimes, having a blog is like going to Confession.  For the non-Catholic school/CCD folks out there, confession is where you tell a priest your bad stuff, and he grants forgiveness.

Well, dear readers, I need to ask forgiveness for I have purchased a silly "As Seen on TV" product, and I love it.  I give you the

It's a little motorized thingy that stirs pots for you.  I felt like a dork buying it, even though I did get it at Joann with a coupon.  How lazy have we become when we can't stir our own dinner?  Hello, Jane Jetson!
Well, here's the reason I bought it - homemade Alfredo sauce.  My sister Kelly introduced me to this lovely culinary delight about a year ago (Yes, I was living under a rock before that).  I'd never tried it.  Worked in Baltimore's Little Italy for 5 years, never tried it.  (remember the rock?)

Kelly made it for me, and I fell in love.  I made it for my family, and they fell in love.  The only problem is that you have to stir it constantly for like 15 minutes.  I just don't have that kind of time to be chained to the stove. As I make dinner, I'm also answering emails, updating Twitter, browsing Pinterest, you name it.
Of course, if it was this stove from Big Chill, I might reconsider:

Anyhow, I have to report that the Robo-stir worked really well.  Resulted in probably one of the best alfredo sauces I've ever made.    I think the constant stirring really helped.  It was so thick and rich.  Basically, the recipe is just a stick of butter, splash of olive oil, Parmesan cheese, garlic, heavy cream and pepper.   Here are some links to recipes I've tried:
HomeEc101
Allrecipes.com
Having recently read Robopocalypse: A Novel

, I have to say, I was a tiny bit worried about inviting a robot like thing into the house.  Even so, I think it's a keeper!
Posted by Quilted Cupcake at 11:19 AM

Glad to know it worked well! And thanks for the recipe links. Allrecipes.com has been a favorite for many, many years!!

I have seen this item on television. Now I am curious to try it. It seems perfect for the sauces that need constant attention! ~Val

I bet that would also work great for a cheesy fondue. That stuff has to be monitored every second or it burns!

I love that stove! Reminds me of my Grandma Tiny's kitchen in her little pink house :) 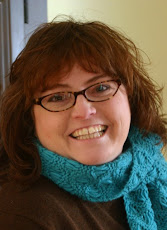